At Gemiini, we only use evidence-based therapy techniques. Here, we have different studies supporting our approach. 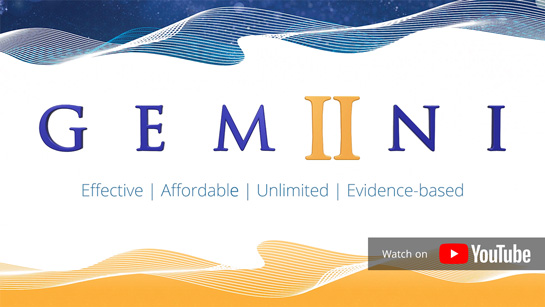 Observational Learning in Children with Down Syndrome and Developmental Delays: The Effect of Presentation Speed in Videotaped Modeling

Observational Learning in Children with Down Syndrome and Developmental Delays: The Effect of Presentation Speed in Videotaped Modeling

“Children with severe developmental delays (three with Down syndrome and three with autism as the primary diagnosis) observed a videotaped model performing two basic dressing skills without prompting, verbal or otherwise, or explanation by an instructor. In a within-subjects design, dressing skills that were presented at a relatively slow presentation speed through videotaped modelling were eventually performed better than those presented at a relatively fast speed. These data in combination with evidence from this laboratory that passive modelling of basic skills is more effective than interactive modelling (e.g., Biederman, Fairhall, Raven, Davey, 1998; Biederman, Davey, Ryder, Franchi, 1994; Biederman, Ryder, Davey, Gibson, l991) suggest that standard instructional techniques warrant reexamination both from the basis of instructional effectiveness and the efficient use of the allotment of teacher time.

“Six students with moderate and severe disabilities were taught generalized purchasing skills through the use of videotape modeling in one, two, or three stores and in vivo instruction within one store. Training was conducted within three orders of treatments: (a) in vivo instruction followed by videotape training, (b) videotape training followed by in vivo instruction, and (c) concurrent videotape and in vivo instruction. Generalization probes were conducted in stores that were the same as those modeled on videotape, untrained stores that were infrequently probed (and never modeled on tape or taught directly), and novel stores that were probed only once after training. Results indicated the production of generalized purchasing skills by the students who received concurrent training and by the students who received sequential training. Videotape and in vivo training in isolation did not lead to generalized shopping skills. The results are discussed in terms of investigating the possible role of verbalization during videotape training on generalized responding and the effects of multiple probe interventions on inadvertent learning of critical skills.”

“Identifying practical strategies for teaching children with autism to use social language with their peers is a challenge for professionals designing treatment programs. The purpose of this multiple baseline study was to assess the effectiveness of video modeling and video feedback for teaching a child with autism to use social language with typical peers during play. Video modeling was effective in increasing social language in two of the three activities. Video feedback and prompting were required in the third activity to effect a stable rate of increased social language. Unscripted verbalizations predominated across all three activities, as did initiations. The results are discussed with reference to previous research, future directions, and implications for practice.”

Study in Eye Gaze in English-learning Infants and Adults

Study in Eye Gaze in English-learning Infants and Adults

The mechanisms underlying the acquisition of speech-production ability in human infancy are not well understood. We tracked 4–12-mo-old English-learning infants’ and adults’ eye gaze while they watched and listened to a female reciting a monologue either in their native (English) or nonnative (Spanish) language. We found that infants shifted their attention from the eyes to the mouth between 4 and 8 mo of age regardless of language and then began a shift back to the eyes at 12 mo in response to native but not nonnative speech. We posit that the first shift enables infants to gain access to redundant audiovisual speech cues that enable them to learn their native speech forms and that the second shift reflects growing native-language expertise that frees them to shift attention to the eyes to gain access to social cues. On this account, 12-mo-old infants do not shift attention to the eyes when exposed to nonnative speech because increasing native-language expertise and perceptual narrowing make it more difficult to process nonnative speech and require them to continue to access redundant audiovisual cues. Overall, the current findings demonstrate that the development of speech production capacity relies on changes in selective audiovisual attention and that this depends critically on early experience.

"Eye tracking has the potential to characterize autism at a unique intermediate level, with links ‘down’ to underlying neurocognitive networks, as well as ‘up’ to everyday function and dysfunction. Because it is non-invasive and does not require advanced motor responses or language, eye tracking is particularly important for the study of young children and infants. In this article, we review eye tracking studies of young children with autism spectrum disorder (ASD) and children at risk for ASD. Reduced looking time at people and faces, as well as problems with disengagement of attention, appear to be among the earliest signs of ASD, emerging during the first year of life. In toddlers with ASD, altered looking patterns across facial parts such as the eyes and mouth have been found, together with limited orienting to biological motion. We provide a detailed discussion of these and other key findings and highlight methodological opportunities and challenges for eye tracking research of young children with ASD. We conclude that eye tracking can reveal important features of the complex picture of autism.”

Over the past three decades, research has demonstrated that video modeling is an invaluable, evidencebased tool for teaching a variety of skills to children with Down syndrome, autism or other language delays. More importantly, scores of studies have shown that once a skill is learned through video modeling, it is maintained over time and generalized across settings.

Gemiini has been clinically proven to be effective: